About us | Foundation profile | Head of management | Committees | Office

Dr Hanns Martin Schleyer, born on 1st May 1915, was inter alia director of Daimler-Benz, President of the Confederation of German Employers’ Associations (BDA) and President of the Federation of German Industries (BDI).
On 5th September 1977, he was kidnapped by members of the “Red Army Faction” (RAF) and his chauffeur, Heinz Marcisz, and police officers Reinhold Brändle, Roland Pieler und Helmut Ulmer were killed. Dr Schleyer was held hostage while his kidnappers demanded the release of imprisoned RAF members. This demand was not met and on the 18th October 1977, after six weeks in captivity, Dr Schleyer was killed by the terrorists.
The events of 1977 posed existential challenges to our constitutional democracy. The Hanns Martin Schleyer Foundation was launched, in response to this threat, as an initiative dedicated to protecting this common good. Its aim is the consolidation and ongoing development of our liberal, democratic society. 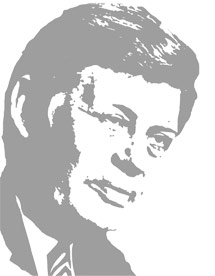